Stupid Mistakes My Letting Agent Made

Over the last few days I’ve been openly bitching about a letting agent I’ve been dealing with. Here are the posts for a recap:
I Just Encountered A Rude Cock-Face Letting Agent
Letting Agent Is Trying To Rip Me Off 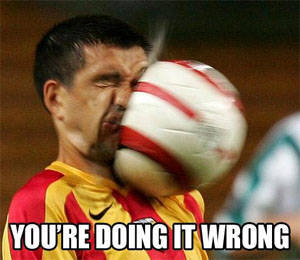 While I’ve already mentioned a few reasons why they did an extremely poor job, I never actually mentioned all the details. To close this chapter, here’s a list of practises the agent utilised which were either illegal or what I considered to be extremely inappropriate:

They marketed the property and took viewings without an Energy Performance Certificate (EPC). As the law stands, the certificate should be provided when (or before) any written information about the property is provided to prospective tenants or during tenant viewings I didn’t even provide my agent with my EPC- so what did they show the tenants? Probably nothing.

The agent asked for a Gas Safety Certificate before they took viewings. So I provided them with one, which they photocopied and kept for record.

Funny thing is, when I got home later that day, I filed away the certificate. At that point I realised I gave them a copy of a certificate which was for a completely different property they were marketing. Obviously they didn’t even check the certificate!!! I know, I’m a dumbass for accidently giving them the wrong certificate, but they should have checked to confirm validity, that’s for sure!!

They bitched about competition

The agent I was dealing with was actually a reasonable guy, but he constantly bitched about other local agents. He kept making a point of saying that the other agents provided a “monkey service”.

If he thinks his services are better than the rival, that’s cool. But I found it rather off-putting listening to him bitch about shit I didn’t really give a damn about. I just thought it was a really bad tactic to bitch about other local competitors (because it is a tactic, make no mistakes). In my opinion, it showed bad sportsmanship and insecurity. He didn’t need to bitch about them, he already had my attention, and I already told him to find me tenants.

They got me a tenant which didn’t match my requirements

As explained in a previous blog post, when the agent came to view the property, before marketing it, he asked me a bunch of questions, like:

I said “no” to all those questions besides from allowing children. I also mentioned that I only want working professionals, and I don’t want anyone too young.

They ended up finding me a 25yr old single mother, that’s a part-time fitness instructor that’s on social benefits.

The two agents I dealt with from the company had repelling traits. The primary agent I was dealing with had a strong ‘wheel and dealer’ vibe. It was friendly banter for the most part, but his banter didn’t actually work on me, and it started to get annoying after 5mins. Every time he said lines like, “I know you’re not a mug, so I wouldn’t set you up with a muppet tenant”, I just cringed and wanted to say, “Please, stop feeding me these lines, just get on with your job”. His continuous need to slag off the competition also added to the bad attitude syndrome.

On a couple of occasions, I spoke to another agent, a colleague of the primary agent I was dealing with. When he found out I may not use their services (because I was working on other ways to get tenants), he got a major attitude problem. He was being aggressive and pushy, but at the same time, trying to persuade me to use their services. It was so weird. He didn’t realise that being aggressive and rude wasn’t going to aid in changing my mind. Go figure. What a complete waster.

If I had a service to offer, and was faced with an individual which didn’t want to use my services, I wouldn’t release a bad attitude. I would respect their decision and at least give them a good farewell impression so they consider my services next time. That brain-dead monkey basically insured that I never EVER consider using them again!!!

Amongst the grovelling and despair from the agent, I was adamant to make them understand why I wasn’t using their service, because they didn’t seem to get it. So I tried making it real simple for them:

If you were in my position, what would you do? You have two sets of tenants- one is a single mother with good rental history, but is on social benefits and a part-time job. The other is a family of 3. Both parents work, and the main breadwinner is a doctor and has good references.

I’d go with the mother, because I can clarify she has GREAT references, and has been renting without problems for the last 4 years. We did credit checks on her, and she ticks all the boxes. Plus, you’ll find that tenants like doctors are more clued up about tenancy rights, so they’re more likely to cause more problems.

So, I should take the single mother because she’s likely to be more ignorant? Fortunately, I’m a good landlord, so if there are any problems, I’d like to fix them, and not rely on my tenants to just be ignorant about their rights.

The agent’s argument was ridiculous. No way would he pick the single mother over a working professional, even if he couldn’t admit it. His efforts of holding onto my business weren’t even admirable, they were cringe worthy and weak.

Overly confident about their service

Throughout the whole dealing, the agent was constantly bragging about how good their services were. I wouldn’t have minded if that’s what the case was. However, my list above certainly disagrees. I have no qualms with confidence, but at least come through with the goods, innit.

Thing is, you're walking away. Hopefully other landlords do the same. I look forward to regulation with Estate Agents!

The EPC is actually the Landlord's responsibilty and it is the Landlord that will get fined if they're caught marketing a property without one.

Agents do not have to see a valid gas safety certificate before marketing a property - only before they move someone in to one.

Can't argue with the rest

The agent had someone ready to move in, so at which point would they have checked it (Gas safety certificate) was valid? If they were going to check, surely it would have been at the point I handed it over to them to make a photocopy?

I was aware that the EPC is the landlord's responsibility, but I also assumed it was the agent's responsibility to ensure there was a valid one in place, so they could actually show it to the prospective tenants. Aren't the agents meant to show the EPC to the tenants when taking viewings?

Either way, I think on both accounts it was clumsy of the agents.

Yup, I had no choice but to walk away. They were a dodgy outfit parading around as if they were the creme da la creme. It was hard to stomach such a pantomime.

Are you in the process of buying/selling?

Just noticed on my agent statement that they have charged me £10 because their workman gave the tenant 'cooker lessons again' Guess what I told them they could do with the charges!!

haha you're kidding? I've never heard anything so ridiculous.

What did they say when you told them to F'off?

Only sent the email 10 minutes ago! Rest assured you lot will be the first to know when I get the reply!

The bloke went around to fit the cooker (£30) and the tenant said she could not get the oven to work. So instead of doing the 'good customer service thing' and showing her FOC or as a courtesy - he shows her and then charges ME a tenner!

Informed the letting company that I expected the charge to be covered under the management fee expeicially since it was one of the managing agents who moved her in and should have showed her the operation of the oven in the first place!

Surely they need your consent before adding on extra services/fees (if you want to call that a service)?

Some people really are trying their luck during this climate.

Looking forward to hearing their explanation for this one!

It was, so they say, not meant for me but as a joke to the MD of the lettings company! I wish I worked in their office!!!

I currently own a flat which I used to live in, then moved out to rent somewhere with my girlfriend. We're basically trying it out living together before buying.

I've let out my flat to a friend until I choose to sell.

I have encountered problems with an agency that can only be described as the biggest bunch of cowboys in history with photographic and email evidence to back it up.
PWR Lettings of Nottingham let a house out charging £900 pcm without inspecting, it was filthy however, they CLAIM to have carried out a full inspection.
Photos and emails available upon request from geordiething@hotmail.com

Saw an advert on a 2 bedroom flat with one reception for 595 a month, so i contact them to view it and they have now change the price to 595 a week. They have mislead me, can i take any action on this?

In regards to EPC, we were let a property as E high rating , when it is a F low rated, can this be challenged ? Also we have not had the use of our upstairs converted loft rooms as the house actually has no insulation!! And the council gave it a Cat A hazard on the upstairs, yet he is charging us full rent.

landlord took me to court for damages to property that i never made.
i lost.i appealed and they never showed up so it was an automatic win.the judge said i had to sue them in court to get my deposit back.
is it illegal to claim my deposit without going to court?