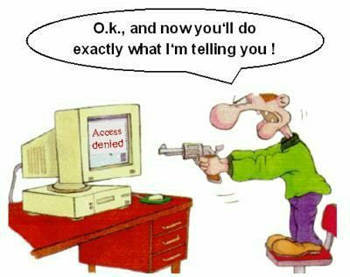 Earlier today, my one and only long-term faithful DSS tenant called me to explain how the council had suspended his benefits because the Tenancy Agreement fixed-term had ended.

I was left wondering, so what if the fixed-term has ended? Why would a tenancy agreement need to be renewed when the current one is still perfectly valid; only difference being that’s it’s rolled into a periodic tenancy. I’ve had a DSS tenant for 3 years in the past, and I only ever renewed the contract ONCE, consequently the fixed-term ended on two occasions, and I never had that problem before.

I was initially totally pissed off at the council, because I’ve had my fair share of shitty experiences with council and DSS tenants and something like this seemed “typical” of the council, so I assumed it was another one of their ridiculous policies taking action. However, it all still seemed rather odd that the council would just suspend benefits for the reason already stated, especially without notifying the tenant.

My tenant was on the phone to the council this afternoon, attempting to resolve this mess. He was informed that the best way to resolve this problem was by getting the Landlord to clarify to the Housing Benefit Department that the tenant is still in fact …..errr the Landlord’s tenant, either by getting a new tenancy agreement drawn up and signed or by writing a letter!

I wrote the following letter:

My tenant [insert tenant name] ([insert property address]) has informed me that his benefits have been suspended due to the fact the fixed-term in our Tenancy Agreement has ended.

I would like to clarify that [insert tenant name] and his family have not surrendered their tenancy, nor have I terminated the tenancy agreement.

Once the fixed-term in tenancy agreements have ended the tenancy automatically becomes a periodic one, which is the case with all assured tenancy agreements, and no different in this case. There is no need for a new contract to be drawn or signed unless the terms and conditions of the existing agreement have changed. In this case, nothing has changed.

I’ve had a tenancy agreement in the past with a DSS tenant which lasted for 3 years without change, and this problem never occurred, so I’m not used to this formality of suspending benefits once the fixed-term in tenancy agreements have ended.

Please take this letter as confirmation that [insert tenant name] and his family are still tenants at [insert property address].

I clarified what was needed to be clarified, but I couldn’t resist from informing them I had never had problems like this before.

I quickly wrote the letter, printed it out, and went to my tenant’s house to hand it to him. He’s going to see the Council tomorrow to try and resolve the misunderstanding, so I told him to take the letter of confirmation with him.

When I popped over to his house we were talking about the situation, and I said, “It’s so weird that they just randomly stopped your benefits without any notification. That doesn’t seem right.”

Then my tenant looked at me awkwardly, like a lost puppy, and pathetically muttered, “errrr…well, a letter came through last week, but I didn’t really read it. It was 5 pages long.”

Urgh! I slapped my head and said, “You idiot!!!”, and he had no choice but to agree. Basically, the letter was inquiring whether he planned on continuing to stay in the property because the fixed-term was due to end shortly. He wasn’t being clear about whether he ticked the wrong box, or just completely ignored the letter, but it was obvious he had been a complete tit!! He had somehow suspended his own benefits. Consequently, my letter seems pretty stupid now, because it seems as though I’m blaming them (which I was). I was too lazy to rewrite it, so I was like, “BAH, just give them that letter anyways, the main point is still there in black and white, even though I do come across as an arrogant, stupid dumb fuck”

Based on previous experiences with the council, I know they won’t be in any rush to resolve this problem. However, apparently they said they will backdate his allowances if this is a genuine mistake (which it is).

At the end of the day, my tenant is a straight up guy and has NEVER missed a payment, so I knew it was a genuine mistake. Granted, that doesn’t excuse the fact it was a pretty stupid and irresponsible mistake to make. Ideally, he should be whipped for his incompetence, just to ensure an important lesson was learned.

Ahh the life of a landlord. It really doesn’t get much better than this. Careless tenants and late rent.

Due to the fact I won’t be receiving my tenant’s rent on time this month, I’ll have to cover the mortgage out of my own pocket, which means I’ll have to be extremely resourceful with my outgoings this month. If you see an extremely charming and attractive man dressed in black, picking fruit and veg from your garden late at night, don’t be alarmed. Moreover, if you want to help get me through this tough period in my life, you’re all welcome to donate to the “Feed the landlord” campaign.

Every penny will help. Give me just £1 (but preferably £5) today, and it will allow me to buy the tools I need (e.g. fishing rod and spade) to feed myself and my family for a life time.

Anyways, what a royal penis my tenant is!!

My HB benefit claimant tenant has been with me for some 15 years. A couple of months ago, I recieved a letter from the Council stating that they were suspending benefit payments completely because they had information that she was no longer at that address. I see her every week and she has no intention of moving. They had also written to her at the property address asking her to get in touch.

When she went to their offices, they said they would re-instate payments immediately and had no idea where the tale of her vacating the property had come from. You couldn't make it up.

Incidentally, I could write a (very boring) book about the problems we have had with the HB payments people over the years. So your tale about the Tenancy Agreement doesn't surprise me - unfortunately!

ah, that explains a lot actually, when my tenant asked for another 6months I had no idea why as she had the week before wanted to move out. anyway, a rant like that has made my weekend.

Yes I can agree completely. Every time my tenant through the dss, changes her nickers and her boyfriend, I dont get my rent, then we have to have her run around and fill in forms, three months of no rent... I own 3 properties, and because I have to live on air, I simply have had enough and selling it! Went round.. with agent to value it... to cut a long story short.. she is a single mother 6 kids and two dogs that I did not allow... full of doggy doo doo.. dirty clothes... its worse than a homeless shelter.. yuck and she has painted every wall a bright colour... so not only do I have no rent I have to give her notice and then redecorate.. I look at this disgusting person and get angry... I have no money for food or fuel.. because she changes her boyfriend every two months and tells the council everything... hard work... living nightmare.

I knew I werent the only one! Lost 3 grand last year through evicting and losing all what was owed to get the mongrel out. Same thing happened this year and i was put onto some guys locally that just deal with landlords and agents who have benefit tenants. To be fair its probably been the best 70 quid ive spent and a meal and pint thrown in (all be it from the 2 for one menu!) Girl I had a consultation with definitely knew her sh*t gave me questions and bits to say to the council even they couldnt handle and gave me the heads up on whart info they ask for and what they can get themselves if they get off theyre arses. Benefit was back in payment within a week and into my bank account and not my tenants. They even gave me a form for my tenant to pass onto her bank so even if shes overdrawn they have to release any monies to me even if she does start getting benefit paid to herself! I'm thinkin of goin for the full consultation just to be able to phone the council and make em squirm knowin more than they do!! BTM consultants (or consultancy staffs) website is tenantsonbenefit.co.uk
May be worth a punt

@Smithy, why didn't the council investigate rather than cut your tenant's benefit? Why should they listen to hearsay or accept such petition?

some people go through hell with nosy people who are always looking for one way or the other to put them in trouble.

Because a lady wore designer sunglasses, the council was asked to investigate her source of income on benefits. The lady was followed for months around London like a criminal and they found NOTHING!

Actually, she bought the sunglasses from a boot sale. Ha ha ha! Envy! If hell does really exit; that is where such envious people would end up.

Good morning, reading your blogs, feel aympathy for you landlords, been there, got tbe tea shirt done it! Due to circumsttances shoe is now on the other foot. Now a dss tenant to be. Hope my effort will raise the profile a lttle,
Regards,
Kelvin

I am a dss tenant, Although I work and contribute to my rent monthly. I am annoyed and upset that all dss tenants are tarred with the same brush. I have decorated my house and am extremely clean and tidy. I have lived here 8 years with my two children. It is a very small 3. Bed roomed property. I recently changed employment and informed local council ensuring they had plenty of evidence etc etc. they have since suspended my rent till investigation etc is completed in doing so my landlady is now refusing to replace my broken and unusable boiler as she feels, understandably, out of pocket. The council is apparently 6-8 weeks in arrears and this will take us into mid November. I am expected to have no adequate heating and my daughter is also an asthmatic on regular medication. What are my rights. I'm a decent law abiding tenant who is being persecuted because of the stigma related with dss.