My Crazy Tenant Wants Me To Pay £300 For New Curtains!

Yesterday, I facetiously mentioned on Twitter about how one of my tenants’ wants me to pay a ludicrous £300 for ONE poxy curtain.

Since I have a spare 20mins right now, I thought I may as well set the scene and over dramatise the situation by writing this pissy little blog post. Horrray!

So, I went to perform a routine quarterly inspection in a property last month. The property was fine, all was good in the hood! While I was talking to my tenant about general shit, she mentioned that the curtain in the kitchen, which hangs in front of the sliding patio doors is filthy, and always has been, so she wondered if she could replace it. The property isn’t furnished, but it did come with that one particular curtain. She didn’t insist or even ask for me to pay for the replacement (probably because I’m not obliged to), but as a gesture of goodwill and to show appreciation, I offered to cover the costs. I told her to get a quote and let me know what the damage is.

A few days ago I received a phone call from my tenant, and she informed me she got a quote for £286. At first I thought it was a sick joke, but it soon became clear the situation was very real when she started to enthusiastically discuss the finer details of the fabric (not that I cared). In the meantime, my mind was busy conjuring up ways to buy some time so my mind could process what was happening. I said,

Can I have a look at the curtains somewhere online or in a magazine? I will get back to you and let you know what I think”

She provided me with the relevant details, but to be honest, I didn’t give a flying fuck what the curtain looks or feels like, I was just a bit concerned that she wanted me to pay £300 for one curtain. That’s a bit much to ask for, innit? Bearing in mind that the current curtain couldn’t have cost more than £80, and I assumed a replacement would cost about £100, maybe a bit more. The property isn’t a luxury penthouse in Knightsbridge; it’s a 2-bedroom mid-terrace situated in a small town that’s fitted with economy household products. The patio doors aren’t big enough to allow the Titanic to sail through, it’s literally about 2.8 meters wide.

(This isn’t an actual picture of the property in question, but the size looks similar) 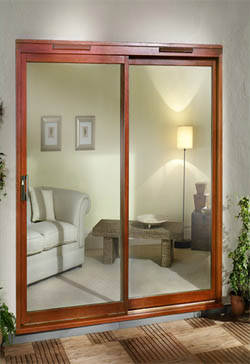 I know for a fact she wouldn’t pay £300 herself for the curtains, but she clearly had no qualms with asking me to cough up the doe, which I thought was rather ballsy of her.

Don’t get me wrong, she’s a great tenant. She pays the bills and takes care of the property. I would happily invest in the property where appropriate. For example, if the cooker needed replacing, I would pay £300+ to replace it. The issue here isn’t money. My problem is related to “proportionality”, or lack there of in this case. Installing a £300 curtain in this property would be like putting a diamond on a brass ring. It wouldn’t be proportionate. You get me?

Anyways, next time I go there for an inspection, I’ll keep my eye out for evidence of drug abuse, because homegurl must be tripping for trying to install a lavish Harrods’ curtain on my expense.

In hindsight, I can’t completely blame my tenant. I was pretty careless. When I told her to get a quote, I should have discussed the budget with her. I’ll know for next time. But having said that, I still believe a little bit of common sense on her part, and possibly less drug abuse, would have enabled her to understand that £300 in this situation was a tad too much! But only by 60%.

I haven’t got back to my tenant yet, but I will do in the next couple of days. I’m just going to be honest and say that the quote she received wasn’t in-line with the budget I had in mind. I’m willing to pay £100, which I think is fair and enough to find something decent. I’ve been thinking of various ways to resolve the situation, and I figure I have a few options…

Which is the best option? Not sure, but I’d probably go with the last option, purely because I think my tenant is worth the £100 investment, and replacing them when she vacates with a regular “normal-people” curtain won’t cost more than £60.

Has anyone else ever had cheeky/ridiculous requests from tenants? Say your piece…

I think option 2 and 3 are good. Offer to keep the curtains, but subsise. If she kicks up, offer her to keep them if/when she moves out.

ahhhh no wonder she thought £300 was a bargain!

Considering you're quite good at having a good ol' moan, you're actually too darn nice or perhaps too soft? Is this because she happens to be a girl? Are you a man?
I'd go for option 2 definitely!! If she vacates in 6 months and takes the curtains with her then you'd have to buy another and spend another £100. That means you would have spent £200 on curtains. What's another £100 quid on top?? Pffft!

I am, indeed, a man. But that's irrelevant. It's about "investing in people". If she was a bitch awful tenant, I wouldn't have offered to pay for the curtains in the first place! But she's a good tenant, a very good tenant, so that small investment has already paid for itself even if she does take the curtains with her.

Over the years I've realised that tenants (the good ones) actually appreciate the small things landlords do. Buying those curtains (or at least contributing) may provide some incentive for my tenant to think twice before she moves out, which in the bigger picture, will save me time and money!

Too true - treat your tenants as paying customers they have a choice where they want to rent.

I completely understand, but would you agree that the gesture to pay and have the new curtains fitted for your Tenant is adequate to show your contribution together with answering and implementing their requests efficiently? Most Landlord's would probably not bother or would drag this out for god knows how long. Giving away things that are still needed after a Tenant vacates a property I think is not really necessary. It probably does not happen all the time and this is a very special one off which is fine and very kind not to mention extremely considerate of you. My view is that option 2 is perfectly acceptable.
That's all........it won't make you an a*** hole!

Yup, I agree with what you're saying, completely.

I've still not completely decided which option I'll go for, but it's a toss up between 2 and 3 (because they're both reasonable options). I'm going to see my tenant on Friday about the issue, so will decide then!

Thanks for the input guys!

Besides, if you're over generous, she might get the wrong idea......
...unless of course you want her to??

Dont forget the fire retardant coating so that if she can't set it on fire and blame you for not supplying the correct fabric!

PS next door neighbours of my tenants wanted me to fit a sound proof roof to a sunlounge! I told them to F*** Off!!

I reckon number 1. You buy a basic curtain to replace the existing. If she wants something different she pays for it and takes it when she leaves. You then still have new curtain to hang there.

Seems timely - just posted entry on my blog about how to be a better landlord http://wp.me/pCIxO-1q

Any further ideas would love to hear

I got a call frok one of my tenants asking me if I would pay for a new vacuum cleaner as her current one had stopped working.
I went round and looked at the machine to find that it was clogged with hair and had a crown cap stuck in a tube. So I set to and spent half an hour cleaning and freeing.
I then gave it back to the tenant and asked her to test it, so she would be confident that it worked.
All was well. I then asked her why she hadn't maintained the machine only to be told 'Oh my mum does jobs like that'

If a vacuum stops working (e.g. loses suction), I imagine the first thing most people would look for is clog'age before considering a replacement!!

I'm surprised you supply a vacuum. Do many landlords do that?

There is a lot to curtain technology, and you may not have the qualifications and experience to deal with this alone. In your shoes I would get a curtain consultant in to ensure that your new curtains meet the latest curtain style and fashion. This may also lead to substantial savings:

Well done for turning a pair of curtains into an extensive blog with even more extensive comments.

I have just discovered your website and I love it!

I am asked to pay for everything by my tenants. They seem to think I'm their mum or some charitable lady who rents out a pad for a hobby and just loves to furnish it for spoiled and lazy professionals!

This is so funny - yes, she would never spend this herself. Does she think you are her sugar daddy or something? Where do they get these grandiose ideas from??!

I work for an estate agents in west London.The most unusual request was around 10 years ago. I dealt with a tenant, a director of a major investment bank, who a month after moving in phoned up and asked if we could arrange to pick up and store the plants in the garden. We were managing the 2000 p/w property. He had just noticed the clause in his TA stating that he, as the tenant, was responsible for taking care of the garden. I said that we didn't, as the MA, have the facility to store plants. He suggested that we could perhaps remove them for safekeeping into the former coal cellar of the property.......

Hi Landlord, we always supply a vacumn cleaner for tenants!

We would have paid for blinds.

I run my own business involving fabrics and I don't know what kind of fabric would cost that much for that type of door but she's mental! you can go for a week in Spain for that!

I have to agree with Helen.

I am quite nifty with a sewing machine and have made my own clothes in the past, yet also make my own curtains too. Unless your tenant wants Egyptian Cotton as lining for the fabric, then she needs to be the one to pay for it.

Perhaps she is too heavily influenced by what she reads in luxurious homes magazines to notice that most curtains are scandalously cheap at Argos, as well as decadently exquisite!

Tell her to collect the rent on your behalf and maybe you will consider her request?