You are here: Landlord Blog » Landlord Articles » Buying & Investing In BTL Rentals » How To Spot The Next Up-And-Coming Area For A Good BTL Investment
2 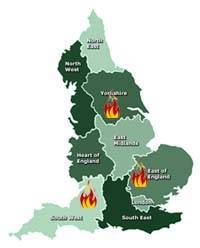 This is a continutation of a previous post of mine, ‘There’s Never A Bad Time To Buy-To-Let‘, where I discussed how there’s always money to be made in the buy-to-let game, even during this current slowdown we’re experiencing. Investing in ‘hotspots’ for buy-to-let purposes is never a bad move. A ‘hotspot’ being a rundown ghetto which will eventually blossom into a desirable area.

Investing in up-and-coming locations rather than already popular locations will give you a much better return on your investment. So how do you identity a potential ‘hotspot’?

There are a lot of techniques used to predict an upcoming ‘hotspot’, but a lot of them I find limited in terms of usefulness. For example, some argue that ‘good schools’ can be used as an indication to predict a hotspot. Yeah, I don’t believe that. ‘Good Schools’ are more likely to be in already established areas; when was the last time you heard of a good school in the middle of Moss Side? Here’s a list of techniques that I use to determine which area is most likely to be a potential hotty…

1. Employment Opportunities
Huge development projects that will encourage a mass growth in employment such as factories, business parks and/or hospitals is a pretty good indication of potential local growth. Employment opportunities can attract hundreds, if not thousands of people from other areas. Those people will need places to live, or rent. A local population growth can also have a significant impact on future developments i.e the more people in a town, the more commodities a town will need.

2. Regeneration
If an area has plans for major regeneration then it’s a good sign that the local authorities have funding to pump into the local area. An area with a positive agenda like regeneration is a no-brainer for investment. Sweeping the grit off the streets and transforming into a more presentable area will entice people to move into those locations, and that’s when property will be in demand.

3. Growing Student Areas
A lot of areas in London have become extremely trendy for students, especially places like Clapham and Dulwich. A lot of students initially flocked to those areas because they were cheaper alternatives to the city. Due to the mass growth in student population, a lot of trendy bars and restaurants started to emerge. Once upon a time it was extremely affordable to buy in those areas- not anymore.

4. Upcoming Surrounding Areas
Look for areas that aren’t so popular, but have surrounding districts that are already popular and desirable. Eventually when those popular districts get overly popular and expensive, the demand for property will overlap into the surrounding locations. I just mentioned that Clapham and Dulwich have become increasingly popular, and that has had a direct impact on the surrounding district, Hackney- a once seen hell hole is now becoming a ‘hotspot’ thanks to it’s local brothers and sisters.

5. Transport Development
Transport is (debatably) at the top of the list of being one of the biggest factors that draw in buyers and renters. Good transport links automatically add value to a property’s price tag. Look for areas that have plans to improve local transport; you can get information from your local council.

Research released by HotProperty.co.uk finds property within a five minute walk of a tube station can be up to 21 per cent or some £80,000 more expensive than a similar property half an hour away.

Important note
Wherever you decide to invest, make sure you get in early. Once a ‘hotspot’ leaks out, sheep will follow and the profit margin will shrink rapidly. Stratford was announced as being the central point for the Olympics 2012- the people that got in early don’t need to worry about their pension- those that want to get in now are running a risk of losing their pension. The surrounding areas, however…

Is it wise to remortgage one property to free up capital to buy another ?

Is this the quickest way to grow my portfolio?

I am a landlord both residential and commercial for over 27 years ( small scale no yachts as yet :) , Its a great idea BUT, you must have a long term plan and stick to it.

If you have cash and its away of using the properties equity to build your portfolio rather than your own.........Awesome ( Medium to long term strategy).

So long as the numbers stack up.

But if you are Asset Rich and Cash Poor which many residential landlords are ...Think very hard about it !!

Your property has made money for you ( PS do not forget Capital Gains Tax, before you start spending this extra money you think you have) now you want to tie it up in another property and start again building up equity over two properties.

Robbing Peter to pay Paul is risky..... That's what happened last time and down South many went from Megga Bucks to losing even their own homes.

Be very honest with yourself and ask ... If it hits the fan ( and it will at some point) can I cope.. can I sell quickly ? do I have a cash buffer? Can I maintain the property myself ? What negative effects will it have on my family and can we survive it ?

Has it worked for me .... yep ( a Huge BUT here, the key word is ME, what works for me many be nuts for you and visa versa.

PS .. Did I nearly lose the lot in the 90's YES IT DID :(
But I had a plan and it all come good and my properties are doing well and Iam buying again.

Property is great ... but its a double edge sword.