You are here: Landlord Blog » Landlord Articles » My Daily Landlord Life (Complaints & Rants) » Are You Going To Bother Sending Your Tenant A Christmas Card?
10

Are You Going To Bother Sending Your Tenant A Christmas Card? 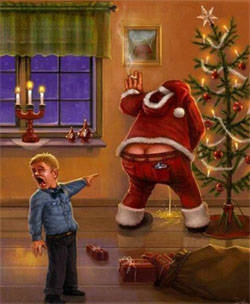 I don’t know about you, but I have a genuine love/hate relationship for this time of year. It’s mostly hate though, and barely any noticeable amount of love. Yes, yes, yes, I’m the Grinch!

I’m just not a fan of the fuss, and this time of year just seems like one big unnecessary fuss… and long queues. The early nightfalls are causing havoc with my routinely running schedule too, and that’s the last thing my hips need right now. But nonetheless I will play nice; I’ll do my best to get dragged through the festivities and join in with the party games and gift exchanges, despite almost always ending up with bags of junk- I mean thoughtful items that reflect the true nature of the Christmas spirit- thoughtfulness, giving and sharing.

Ok, I’m not a Scrooge; I’m just at that awkward stage in my life where Christmas seems pointless. I’ve always believed that Christmas is pretty cool for grandparents, parents and children. I’m neither, so I view this time of year as a bitterly cold season where cab fares costs double in price.

Why I hate Christmas. Maybe.

Here’s a devastating story for you that will break your little ‘ickle hearts, and perhaps one of many reasons for why I’m such a deprived, miserable and tortured child…

A few years ago me and my bestie decided to do the whole present exchange thing. We had never done it before – it’s not really a manly thing to do, it’s more of a girly thing, right? Anyways, that year we decided to neck a shot of estrogen and tap into our sensitive sides by pushing aside the stigma attached to young burly men exchanging Christmas presents.

Never again. It became very clear why two men should never exchange gifts that they personally hand-picked; it’s because we’re generally too thoughtless to be any good at it (unless there’s a chance it will lead to sex). However, I genuinely put a lot of time and effort into the present selecting process, and consequently the bestie ended up with some pretty neat stuff, which included: a pair of trainers, a trendy shirt, his favourite ‘coconut slice cake-thing’ from the coffee shop EAT, a couple of strategically chosen DVD boxsets and music CDs. I was pretty excited and glowing with confidence, because I knew he’d be surprised at how well I knew him!

In exchange, he handed over (wrapped in tatty newspaper, may I add- he thought that was hilarious!) a pack of multi-coloured ball-point pens (seriously, WTF? That’s the kind of gift senile old women dish out), a basketball vest (only because I briefly mentioned that I played basketball a few weeks before and not because I’m “into it” or anything. I eventually sold it on ebay for £50), and a homoerotic calendar of a ‘young’ David Hasselhoff (which I left on the seat of the restaurant where the exchange was made). Overall, a collective pile of massive shit.

You can only imagine the deep depths of my disappointment. Trust me, I didn’t even attempt to hide my emotions and I was very reluctant on allowing him to walk out of the premises with all the cool items I showered him with. But I did, and he was certainly very pleased with himself.

Forget the whole “it’s about the giving” concept- I was scammed plain and simple! Had I of known he was going to hand me over a bag of crap, I would have happily visited my local toy shop and purchased him fake-poo, a connect-4 travel set, a half-filled bag of penny-sweets and a pair of nail-clippers from Boots. At least that way we’d have both walked away with items on the same devastating scale of poor quality. Bah!

While I could quite effortlessly continue to suck the living joy out of the festive season, I won’t.

So anyways, what about your tenant- do they deserve a card?

Landlords, are you going to bother sending your tenant(s) a Christmas card, or perhaps even a gift, like a bottle of £2.99 Merlot (hoping that your tenant will appreciate the thought and neglect the fact it tastes like donkey piss)? What do you usually do, and what are you going to do this year, anything different?

I usually send a card and a bottle of Champagne, but I’m not sure I can be bothered this year. I actually have no real reason to go against tradition, I just literally feel like I can’t be bothered. It has nothing to do with money, it has nothing to do with the fact I dislike my tenants (I don’t, by the way)…it’s just, I genuinely can’t be bothered. My Christmas spirit is usually low, but never this low. I’m not miserable or anything, I’m just not in the festive spirit.

I’ll probably end up sending my tenants overpriced luxury cards, with a personal message (because I hate receiving cards with generic messages). But beyond that, I doubt I’ll push the boat out. But to be honest, a nice card says a lot, in my opinion. Granted, it doesn’t say as much as a chilled bottle of Moet…

Call me an old soppy sod but yes, I have sent my tenants a card this year. After all christmas is a time for peace and friends and putting the rent up in the New Year (gotta pay for the cards afterall!).

Well, I'm sure your tenants will appreciate your card :0
Are you seriously putting the rent up? hah

ha!
well I was thinking of giving them a $100 bucks of rent but fuck that shit, I'm going to need that money...

I did intend on being a nice landlord seeing as it is my first Christmas at being a wonderful landlord. I did consider giving my tenant free broadband for a year...however hmm life got in the way and I forgot. So I thought about a £100 discount in rent for Janaury..which after some thought turned to £50. Then I decided not to bother! :)

So a card with afew nice words will have to do and maybe a small box of chocolates so she can celebrate her new 6 month tenancy! This is if I get to post them in time, you know with the snow and all :/

Free broadband/£100 down to a card and possibly a box of chocolates.

I could of been worse..the thought of sending a tacky e-card did cross my mind.
I'm not as festive this year it seems!

If you are going to give your tenants something - why not get the carpets steam cleaned 'for them' - that way you can maintain your property whilst they are in situ and not have to take longer cleaning the property up when they depart. Also maintaining the carpets will make them last longer which is of more of a benefit you..

Happy new year all...seeing as how I missed Christmas..

I have not sent my tenant a Christmas card or present or anything at all for 2 reasons which will be come obvious if you have a look at entry No. 175 on the I'm evicting my tenant part of this site.....

2. She is not there but in Nigeria

However, the best part about my plight has been finding this site!!

Wishing you all a happy, prosperous and problem free new 2010!
Andrew

I gave the cash tenants $100 bucks off the rent for the Section 8 (govt subsidized) I gave nothing.

Hehehehehe steam cleaning as a Xmas present - that has got to better than Xmas cards!!!!!

Me - I was feeling festive this year - went to the Xmas markets in Berlin and got well in the mood. Then I had some mulled wine and a few too many mince pies and well - just didn't happen. I am going to landlord hell...